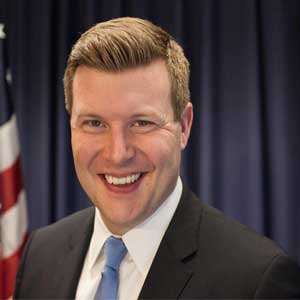 Sean Scanlon is the State Representative for the 98th District of Connecticut. The son of a police officer and small business owner, Sean graduated from Boston College and served as Victim Advocate in the Manhattan District Attorney’s Office before joining the staff of Senator Chris Murphy in 2009.

Since being elected in 2014, Sean has led the legislature’s effort to combat Connecticut’s opioid epidemic and became a leading voice on issues of mental health and addiction. He has sponsored and passed legislation limiting first-time opioid prescriptions to seven days and requiring first responders to carry Narcan. Sean is the chairman of the Insurance and Real Estate committee and serves on the Public Health and Transportation committees.