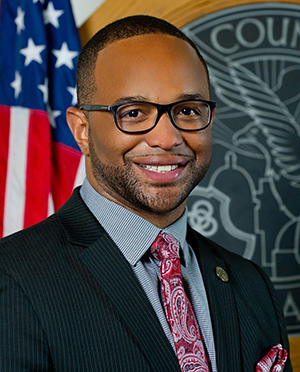 Albus Brooks is a former Denver City Councilman. He served from 2011 to 2019. He moved to Colorado in 1997 to study and play football for the University of Colorado. Sports Illustrated named him one of the Top 10 Hardest Hitters, and the NFL took interest in him before injuries ultimately ended his football career.

Albus pursued his calling for community development by working with young people in Denver’s poor communities. He served as the Director of the Issachar Center for Urban Leadership, an organization that invests in Denver’s emerging leaders.

In 2010 Albus worked to elect then-Mayor John Hickenlooper as Governor of Colorado, acting as the statewide Outreach and Political Director. This exposure to political leadership led him to seek public office, and in 2011 Albus defeated 38 opponents to become the youngest African American ever elected to Denver City Council.

Albus Brooks received his M.B.A. from the University of Denver. He is now the Vice President of Business Development and Strategy for Milender White, a Development and Construction firm operating in Southern California and Colorado.

Albus sits on multiple boards and commissions and has been a part of the following national and international fellowship programs: The Marshall Memorial Fellowship, the NewDEAL Leaders, and the Aspen Institute-Rodel Fellowship.

Although a rising global leader, it is in the heart of Denver where Albus feels most at home. He lives in the Cole neighborhood with his wife Debi and their three young children, Makai, Kenya, and Kaya.