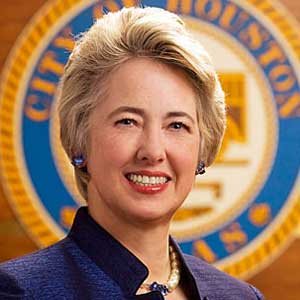 Annise Parker is Houston’s second female mayor, and the first elected openly gay mayor of a U.S. city with over a million residents.

In the private sector, Mayor Parker spent 20 years working in the oil and gas industry, including 18 years with Mosbacher Energy Company. She also co-owned a retail bookstore for 10 years.

Parker has spent 13 years in service to the people of Houston, first as a City Council member and six years as City Controller. She is the only person in Houston history to hold the offices of council member, controller and mayor. Her first term mayoral accomplishments include the appointment of the city’s first sustainability director, reorganization of several City departments to achieve cost savings and more efficient operations, and adoption of a long-term financial plan that ensures the stability of the City’s water department.

As city controller she shunned divisive politics in favor of a no-nonsense, transparent approach to fiscal policy and a commitment to the use of performance audits to achieve more efficient and effective government. While a member of City Council she played leadership roles in the creation of the City’s Rainy Day Fund, a civic art program, and tighter regulations for inner-city development.