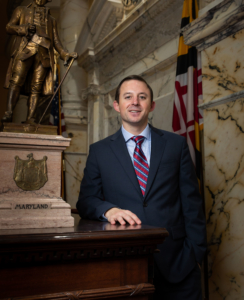 Senator Ferguson, was elected to the Maryland State Senate in 2010 to represent Maryland’s 46th Legislative District.  He first served on the Education, Health and Environmental Affairs Committee before moving to the Budget and Taxation Committee, where he became Vice-Chair of the committee and Chair of the Education, Business, and Administration Subcommittee. In January 2020, his colleagues unanimously elected him to serve as President of the Maryland Senate, making him the second youngest Senate President in Maryland history. As Senate President, Bill ensures that he looks out for the needs of all Marylanders and the critical issues facing our state.

A lifelong Maryland resident, Bill made Baltimore City his home when he joined Teach for America after graduating from Davidson College with a double major in political science and economics. From 2005 to 2007, Bill taught U.S. history and U.S. government to ninth and tenth graders in a breakout academy of one of Baltimore’s most challenged high schools. Bill earned his Master’s degree in Teaching from the Johns Hopkins School of Education in 2007.

The inequities of the public education system in Baltimore City led Bill to engage more deeply within the community outside of the schoolhouse. After teaching, Bill worked as a community liaison for the Baltimore City Council President’s Office; earned a law degree from the University of Maryland Carey School of Law; and served as the Special Assistant to Dr. Andres Alonso, former CEO of the Baltimore City Public Schools. Through these pursuits, Bill continually drew from his classroom experiences to find ways to bring new resources and greater attention to the city’s educational achievement gap.

Race to the Tots

Problem Investing in a 4-year-old’s brain is the single best investment we can make for the longest term return on closing academic and achievement gaps, but it’s been difficult in many places to prioritize funding for preschool and test what works best. Solution Senator Ferguson has an innovative solution: “Race […]

Problem US Schools are more racially and economically segregated than 40 years ago. In Maryland, the most segregated schools have the highest level of low income students: schools where 99 to 100% of the student population is minority, about 73% of the population is low income. The current education model […]