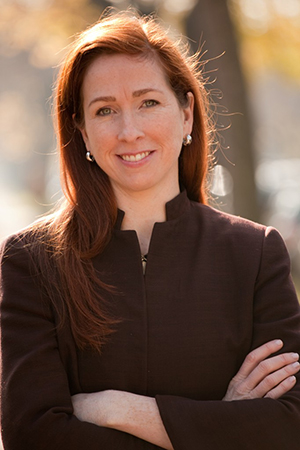 Pro-Growth Progressive Idea: Led the creation of the largest geographic land bank in the country to revitalize communities by redeveloping vacant land.

Bridget Gainer brings a unique perspective to civic and business life with a foot in both the public and private sectors. Bridget is the VP of Global Public Affairs for Aon and a Commissioner on the Cook County Board, bringing over 20 years of experience in non-profit, government and corporate sectors. Bridget began her career as a community organizer in New York City; she continued that work in Chicago where she founded a community center at Senn High School. Bridget then went to work for the City of Chicago in a variety of roles focused on public private partnerships.

Elected to the Cook County Board in 2010, Bridget called for the creation of a Pension Committee and was appointed its first Chairman. As Chair, Bridget brought transparency to the County’s Fund and launched an open-data pension website to facilitate a real conversation for fair and sustainable pension reform. In 2013, Bridget completed three years of organizing and outreach with the creation of the Cook County Land Bank, the region’s most comprehensive policy to reduce the amount and impact of vacant land and abandoned buildings that she chairs.

Problem With rising tuition costs and high levels of unemployment amongst graduates, college is no longer a guaranteed pathway for everyone to secure a job. […]

Problem Vacant housing hinders economic development, weakens the tax base and imposes significant costs on already-struggling municipalities and their taxpayers. These properties have a devastating […]