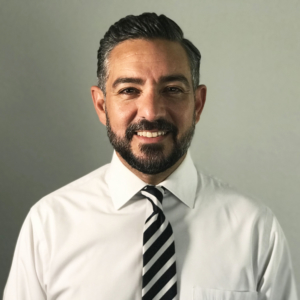 Coming from a family of nurses, teachers, and a tradition of U.S. military service dating back to World War I, public service runs deep through César’s family. The grandson of an immigrant who came to Texas to build a better life for their family, César was raised in El Paso by a single mom who worked multiple jobs to make ends meet.

After high school, César continued his family’s tradition of public service by joining the Navy as a Military Intelligence Analyst and went on to earn his degree from the University of Texas at El Paso with help from the GI Bill. He continued his public service by working for three Democratic Members of Congress representing El Paso and West Texas. Working his way up from caseworker to Chief of Staff, César delivered for his community by fighting to secure veterans’ benefits and our fair share to improve education, make health care affordable, and create greater economic opportunity. In 2015, César was elected to Texas House District 76 in El Paso.

In the Texas House, César has delivered as a strong champion for El Paso by leading initiatives to strengthen our workforce, local economy, and border communities while also improving the quality of life and increasing economic opportunities for all Texans. He has also led efforts to protect education benefits and expand mental health resources for Texas veterans, reign in rising prescription drug prices, and increase oversight over border security, and fought with a united El Paso delegation to deliver historic school funding. For his record of fighting for veterans, education opportunities, and border communities, Texas Monthly named him one of the best legislators in Texas.

Rep. Blanco is proud to be active in the El Paso community as a member of the American Legion and American G.I. Forum Paso Del Norte Chapter, an Executive Committee Member of the El Paso Metropolitan Planning Organization, a member of the Rio Grande Council Of Governments, a former board member of Big Brothers Big Sisters of El Paso, and an honorary board member of the Medical Center of the Americas Foundation in El Paso. On the national stage, César also worked at the U.S. Department of Veterans Affairs, the Democratic National Committee, and was the political director and interim Executive Director of Latino Victory Project.