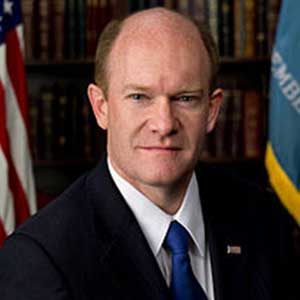 Coons has worked hard to earn a reputation as a principled, pragmatic legislator eager to find bipartisan solutions to the issues confronting Delaware and the nation. He has emerged as a strong voice for job creation and the innovation economy, responsible deficit reduction, progressive social justice, and forward-looking foreign policy.

Committed to fulfilling the economic potential of American innovation, Senator Coons has introduced legislation and worked aggressively for a series of measures designed to help create jobs and grow our economy, including a comprehensive overhaul of the nation’s patent system, new protections for American intellectual property, and critical investments in research and development. His first bill in the Senate, the Job Creation Through Innovation Act, would help revitalize domestic manufacturing and create conditions to help businesses grow and create middle-class jobs. Chris later teamed up with Republican Senator Marco Rubio of Florida to introduce the American Growth, Recovery, Empowerment and Entrepreneurship Act, a bill containing an array of job-creating measures supported by both parties.

Chris’ election to the Senate in 2010 capped a decade of successful service in New Castle County government. In four years as New Castle County Council President and six years as New Castle County Executive, Chris earned a reputation for delivering real results on behalf of Delawareans and protecting the county during the least stable national economic climate in decades. Chris balanced six budgets by eliminating wasteful spending and created jobs through innovative public/private partnerships. His Safe Streets partnership removed dangerous parole violators from our neighborhoods and cleaned up dozens of the worst county properties. He also preserved hundreds of acres of open space and fought for an independent ethics commission to make county government more transparent in its business dealings.

Prior to serving as County Executive, Chris worked as an attorney for Delaware-based W.L. Gore & Associates, one of the 200 largest privately held companies in the United States, where he helped the company expand and create hundreds of jobs. Chris is a graduate of Amherst College with a B.A. in Chemistry and Political Science, and earned his law degree from Yale Law School and a Master’s in Ethics from Yale Divinity School. Chris also studied at the University of Nairobi in Kenya.