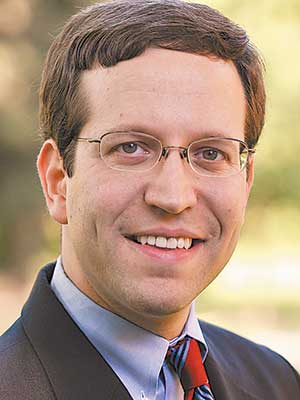 Pro-Growth Progressive Idea: Supporting investments in science and technology that grow the economy not just for a year or two, but for decades to come

David was elected in 2012 to the New York State Assembly, where he brings his experience as a local government official, an economic analyst and a tax attorney, and his belief that public policy can help people obtain the skills and opportunities they need to provide for their families and contribute to their communities. In the Assembly, David has worked to strengthen ethics, make smart investments in infrastructure, and consolidate services in order to make government more efficient. He has taken the lead on such issues as keeping the electric vehicle manufacturer Tesla in New York State and stripping pensions from convicted officials that violate the public trust. David has gained particular notoriety this year for his successful push to adopt a law allowing the sharing of the New York State tax returns of top government officials, a law which Donald Trump is now suing to block.

Before serving in the Assembly, David worked at National Economic Research Associates where his research focused on antitrust economics and then as a tax attorney at Paul, Weiss, Rifkind, Wharton & Garrison LLP. He was also a member of the White Plains Common Council, where he advocated for enhanced budget scrutiny, authored legislation strengthening the city’s code of ethics, and successfully pushed for zoning changes that brought dozens of good-paying jobs in scientific research to his community. David is a graduate of Yale University, where he received a B.S. in Physics, as well as Harvard Law School, where he received a J.D. cum laude, and the John F. Kennedy School of Government, from which he obtained a Masters in Public Policy.

David is running for Congress in 2020 in New York’s 17th Congressional District (Rockland and Westchester Counties).

Problem Small businesses often do not have the resources to harness expertise in research and development. Meanwhile, scientific, technological and other research facilities are often looking for new projects. Funding the linkage between these two groups would lead to new opportunities for economic growth. Solution Assemblymember Buchwald is proposing to […]