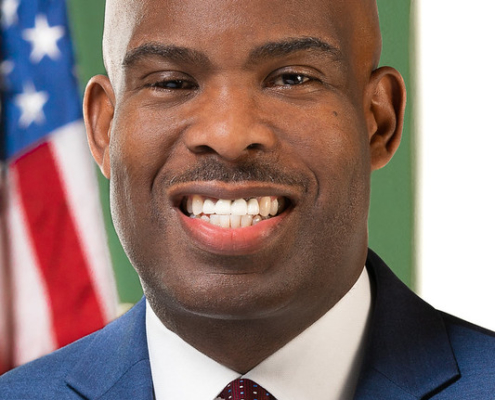 In 2015, Councilmember Derek S. Green, Esquire won the Democratic primary for City Council At-Large in Philadelphia by receiving the highest number of votes cast in the election, and, later that year, he was elected as a member of the City Council of Philadelphia. In 2019, he was elected for another term. Councilmember Green chairs the Committee on Finance and Disabilities and serves as the Vice Chair of the Committees on Aging and Law and Government.

Prior to working in City Council, Councilmember Green served as a Deputy City Solicitor in the Housing and Community Development Division of the Corporate Group of the City’s Law Department. As a Deputy City Solicitor, he represented the Offices of Housing and Community Development and Neighborhood Transformation Initiatives, Commerce Department, and Vacant Property Review Committee and annually drafted, negotiated, and reviewed over $100 million in housing and economic development contracts.

Additionally, Councilmember Green’s legal experience includes positions as an Assistant District Attorney in Philadelphia and Assistant Deputy Attorney General for the State of Delaware (Securities and Criminal Divisions). He is admitted to practice law in the Commonwealth of Pennsylvania and State of New Jersey and graduated from the University of Virginia and Temple University School of Law.

Councilmember Green and his wife, Sheila, co-founded the first Autism Support Class at Houston Elementary School to help other Autistic children like their son.  To aid other families affected by Autism, they are a top regional fundraiser for Autism Speaks.

Establishing a Public Bank in the City of Philadelphia

The bank would elevate women and minority-owned businesses, reducing racial disparities in business ownership and making it easier for these companies to secure loans.

Problem Philadelphia has the unfortunate distinction as the nation’s largest poorest city, with a poverty rate of more than 26 percent. More than 84% of […]