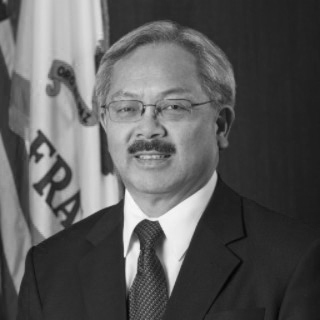 The first Chinese-American mayor in the history of San Francisco, Edwin M. Lee was mayor of San Francisco from 2010 until he sadly passed away in 2017. He was proud to represent a city famous for its creative spirit, open and welcoming residents, and long tradition of pursuing creative solutions for the challenges of today.

During his tenure, San Francisco added 140,000 jobs, helping drop unemployment below three percent. In 2014, Mayor Lee pledged to create 30,000 new and rehabilitated housing units by 2020, of which 50 percent would be affordable to working and middle-class families. So far, more than 17,000 units have come online for local residents. Under his watch, San Franciscans approved two major bond measures to help fund transportation infrastructure projects, and he authorized the Transportation Sustainability Fee, which will generate $1.2 billion for public transit initiatives over the next 30 years. He championed responsible pro-growth policies that benefit all residents, from attracting major corporations to San Francisco like Salesforce and Twitter, to supporting local legacy businesses through his Invest in Neighborhood initiative.