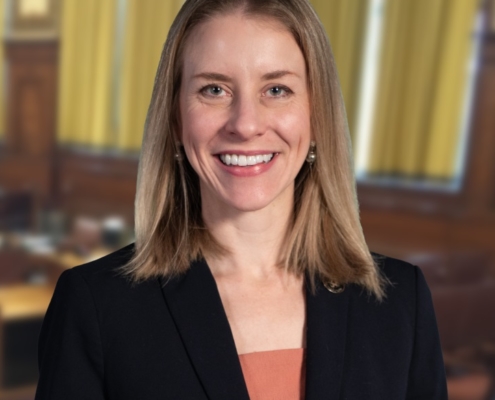 Erika Strassburger is a Member of Pittsburgh City Council, proudly serving the residents of the City’s 8th District. She is the first woman elected to this seat. Previously, Erika served as Chief of Staff for her predecessor, former-Councilman and NewDEAL Alumnus Dan Gilman.

In her first year on City Council, she introduced trailblazing legislation to expand employment protections for pregnant workers, those seeking to become pregnant, and their partners, helping to protect workers throughout the City. In addition, she introduced legislation to overhaul and modernize Pittsburgh’s municipal waste and recycling code, which among other provisions, set parameters for residential composting, codified best practices for containment and storage of waste, and built a foundation upon which Pittsburgh can become a Zero Waste City. She has also helped to passed policies to prevent against discrimination based on gender identity and expression citywide.

As the Council Member representing the Squirrel Hill neighborhood of Pittsburgh, Erika was immediately impacted by the October 27, 2018 mass shooting at the Tree of Life Synagogue. In response, she led the way on a package of ordinances to ban the use of assault weapons and certain firearm accessories in the City, implement red flag policies for those at risk of harming themselves or others, prevent the extreme risk to children by holding gun owners accountable, and increase funding for the City’s violence prevention initiatives.

She has been an outspoken advocate for policies promoting clean water and air, equitable and diverse communities, safe, complete streets, and an open and transparent government, and is passionate about offering new ways for her constituents to be informed involved in city government.

Problem Pregnant employees, employees seeking to become pregnant, and those recovering from childbirth are forced to choose between their reproductive decisions and their livelihoods. Workers […]