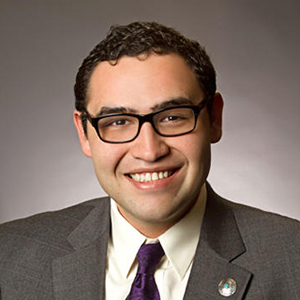 Born and raised in Albuquerque, Jacob was first elected to the New Mexico state senate in 2012 at the age of 25. Since joining the Senate, Jacob has developed a proven track record of passing common sense, bipartisan legislation, aimed at improving the quality of life for all New Mexicans. Some of his legislative accomplishments include sponsoring and passing the Rural and Low Income Schools Broadband Act, which marks the single largest investment in broadband connectivity for public schools in state history; the Tax Payer Fairness Act, which created an independent administrative law process for families and businesses to resolve tax issues; the Carlos Vigil Bullying Prevention Memorial Act that creates a special board and fund to support bullying prevention work statewide; the Patient Continuity of Care Act that provides seniors and families with important protections to prevent unnecessary interruptions in their prescription drug coverage; and legislation calling for an end to the dangerous practice of using so-called “Reparative” or “Conversion” therapy on the LGBTQ community.