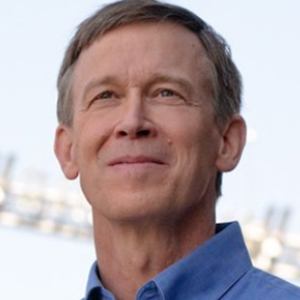 John Hickenlooper was elected to the U.S. Senate and took office in 2021, following two terms as Colorado’s governor from 2011 to 2019. He has spent the last twenty years finding solutions to challenges facing Coloradans. He is excited to continue and expand those efforts in the US Senate.

John started his career in Colorado as a geologist. After being laid off in the long recession of the mid-80’s, along with an estimated 10,000 other Earth Science professionals, he opened the state’s first brewpub in a neglected warehouse district in Lower Downtown (LoDo) Denver. He and his partners started multiple businesses, renovating nearly a full block of LoDo warehouses in mixed-use developments that included 90 units of affordable housing. His company led the renovation efforts of more than a dozen historic buildings in cities across the Midwest.

In 2003, John was elected Mayor of Denver. As Mayor, he focused on bringing people together to get things done, just as he’d done as an entrepreneur. He unified all 34 metro mayors to fund and build FasTracks, at 119 miles of new track the most ambitious US transit initiative in modern American history. John made Denver the first large city to provide quality Early Childhood Education for every 4-year old, initiated the most significant police reforms in the City’s history, and opened one of the first offices of sustainability in the country.

John served as Governor of Colorado from 2011 to 2019. During his tenure, Colorado’s economy recovered from ranking 40th in job creation during the Great Recession to become the number one ranked economy in the country (US News & World Report). As Governor, he expanded health care to half a million Coloradans, established climate pollution limits that served as a national model, and enacted commonsense gun safety measures. He oversaw the creation of the first regulatory framework in the US for the legalization of recreational marijuana, which has become the gold standard for other states.

As Colorado’s U.S. Senator, John will continue working to bring people together to address Colorado’s toughest problems — whether rebuilding a stronger, more resilient economy after Covid, lowering the costs of health care and prescription drugs, or combatting climate change and protecting our public lands. He is honored to work for the people of Colorado.