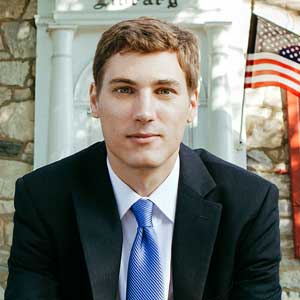 Josh Maxwell is a lifelong Chester County resident whose priorities are to ensure that all of our communities thrive, to create opportunities for working families, and to affirm and safeguard the equality of all people.

Josh began his term as Chester County Commissioner in January 2020.

Prior to his election as Commissioner, Josh served three terms as Mayor of the Borough of Downingtown.  First elected at the age of 26, Josh was also noted as the Borough’s youngest mayor. During his time as Mayor of Downingtown, Josh was a proven driver of economic change and job growth, an ally in causes of social justice and equality, and he supported seven straight no-tax-increase budgets.  Also during his time as Mayor, Downingtown Borough reduced its debt by 60 percent, and Josh was instrumental in negotiating the largest public and private investment in Downingtown’s history in the form of a transit-oriented and train station development.

Josh is also an advocate for addiction treatment and domestic violence causes. In addition to serving in his previous mayoral position, Josh has worked as a USAID contractor, developing international development programs around the world, including Nigeria and Mozambique.

A graduate of Downingtown High School, Josh earned a Bachelor’s Degree from West Chester University and a Master’s Degree in Public Administration from the University of Pennsylvania. Josh and his wife Blair Thornburgh, an author of books for children and teens, reside in Downingtown, PA.

Problem Chester County experienced immeasurable loss during the pandemic, including more than 800 lives and hundreds of businesses. In order to get back to where we were, and ideally have a better economy than we had previously, we need to include all corners of our community to develop long-term, forward […]

Problem Small industrial towns have seen manufacturing jobs leave and have lacked the ability to attract millennial workers to their communities who will pay into the tax system. Solution Our plan addresses the issues keeping millennials away from suburban communities, and provides the infrastructure necessary to provide jobs, without burdening […]

Problem People in working-class communities make the biggest investments of their lives when buying homes or starting small businesses. But most people’s credit is limited, so expensive sustainable building practices are not an option, and their community misses out on a clean energy infrastructure. At the same time, federal […]