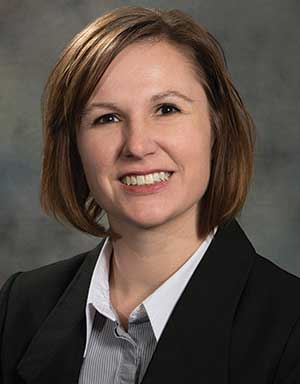 A proud sixth generation Nebraskan, Kate Bolz grew up on a family farm near Palmyra, outside of Lincoln. She has represented South Central Lincoln in Nebraska’s Unicameral Legislature since 2013.

In the Legislature, Kate works with both Republicans and Democrats to deliver an annual balanced budget that reflects Nebraska’s priorities. Her colleagues elected her to serve as vice chair of the Appropriations Committee, which proposes that budget. She is a member of the Legislature’s Executive Board and Retirement Committee. She also serves on several special committees. She is chair of the Economic Development Task Force, as well as a member of the Children’s Commission and the Department of Correctional Services Special Investigative Committee.

In addition to her legislative work, Kate is the Executive Director of the Nebraska Association of Service Providers, an association of community-based disability service providers across the state. She is also an adjunct professor at Nebraska Wesleyan University. She is a Meals on Wheels volunteer at Tabitha, a member of the Foundation for Lincoln Public Schools Board of Directors, and an active member of both her hometown church, the Palmyra Presbyterian Church, and of First Plymouth Church in Lincoln.

Kate earned her bachelor’s degree from Nebraska Wesleyan University and a Master of Social Work from the University of Michigan.

Problem In 2015, a Nebraska Chamber of Commerce Survey of 1,200 employers found that 52% had experienced difficulty hiring qualified employees within the previous year, […]

Problem The ACE Promise program solves two problems: one, the lack of skilled workers in in-demand occupations like nursing and two, the need to create […]