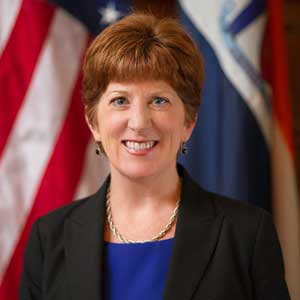 Mayor Kathy Sheehan is in her second term as Albany, New York’s 75th mayor.  Mayor Sheehan has dedicated her administration to creating a City of opportunity, leading with a commitment to equity and responsive government that includes diverse community voices.

Under Mayor Sheehan’s leadership, the City adopted its first new zoning code in more than half a century, secured unprecedented new State aid, became the third City in the U.S. to implement Law Enforcement Assisted Diversion, which provides alternatives to arrest for certain non-violent offenders, and secured millions of dollars in funding for workforce development.  She also invested in new IT systems, created an Innovation Office, and implemented numerous cost-saving initiatives that improved the City’s bond rating and held the line on taxes.

Kathy served a four-year term as Albany’s Treasurer prior to being elected mayor.  Before serving in elected office, she was the vice president, general counsel, and corporate secretary of a publicly-traded medical device manufacturer.

Problem The citizens of Albany are either limited to target broadband speeds or have no affordable access to broadband at all, creating a gap in […]