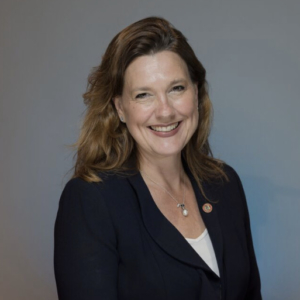 This term is her second time representing the people of District C, serving back in 2010-2014 before taking a break to spend time with her family. Since being re-elected, she authored the “Ban the Box” ordinance, which prohibits the City and City contractors from asking about potential employees’ criminal history on initial job applications. As an affordable housing advocate and a neighborhood preservationist, she has tackled the City’s Short-Term Rental program, fighting developers to keep homeowners in neighborhoods.

Throughout her career – as a councilmember, business owner, and non-profit executive – she has been a tireless advocate for New Orleans with a record of making a difference. As the mother of three daughters, Kristin knows the importance of safe streets and healthy communities. With over 20 years of experience in neighborhood revitalization, economic development, and community organizing, she has developed and implemented innovative solutions for some of the most challenging issues confronting New Orleans. She is a leading champion of community-driven neighborhood planning and revitalization, smart growth, and sustainable development.

Among other achievements, she secured funding to train more police officers and put more patrols on the street; advocated for better parks, libraries, and playgrounds to keep kids safe; and expanded public transportation to connect the city’s neighborhoods and make jobs more accessible.

Kristin played a leading role in rebuilding New Orleans after Hurricane Katrina. As Executive Director of Rebuilding Together New Orleans, Kristin developed one of the largest AmeriCorps and Vista programs and led over 10,000 volunteers to help rebuild Katrina-damaged homes. She developed an annual $6 million rebuilding operation and leveraged over $7 million in public funding to create a long-term sustainability model in our communities. She founded Confetti Kids, a non-profit that improves the quality of life of children in Algiers Point through the renovation of parks and playgrounds and was a founding board member of Evacuteer.org. In 2014, Kristin opened a housing construction, and renovation company focused on reducing blight and providing affordable housing to almost 30 new homeowners in Algiers.

Kristin was raised in New Orleans, the daughter of a former federal prosecutor and a school teacher, and the second of eight children. She graduated from Ursuline Academy and earned a Bachelor of Arts in History from St. Louis University. She and her husband, Bobby, live in Algiers with their youngest daughter.