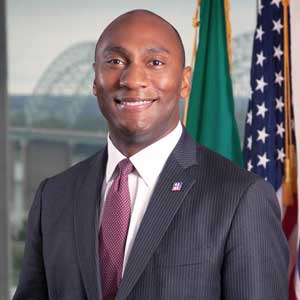 Pro-Growth Progressive Idea: Expanding opportunity by giving a preference in city contracts to those that provide workforce training

In August 2018, Lee Harris was elected as the 6th Mayor of Shelby County, Tennessee. Prior to his election, Mayor Harris served in the Tennessee Senate and the Memphis City Council. Throughout his political career, Mayor Harris has been an unwavering voice for neighborhoods, public safety, environmental protection, and a strong middle class. He has won numerous awards because of his work in politics and government, including selection to the prestigious Aspen-Rodel Fellows program and as a New Deal Leader.

Mayor Lee Harris is a proud product of the public schools in Memphis (Alcy Elem., John P. Freeman Middle, and Overton High). He was a top student at Morehouse College and worked his way through law school at Yale. After law school, Mayor Harris practiced law and later joined the faculty of the University of Memphis Law School. He is believed to be the first African American tenured full professor of law at the University of Memphis.

Mayor Lee Harris is married to Professor Alena Allen and, together, they have three children, Lee Allen, Claudia, and Lou.

901 Student Passport – A Local Getaway for Students and Families

Problem Narcan, or naloxone, is a powerful opioid antagonist used by first responders to treat those experiencing an opioid overdose. Medical professionals tell us that […]

Problem Parole hearings are often delayed, which can significantly impact someone’s life. My bill was inspired in part by the story of Mr. Robert Polk, […]

Problem Previously, the law stated that an ex-offender could petition for their certificate of employability, which is available to ex-offenders who committed non-violent crimes and […]