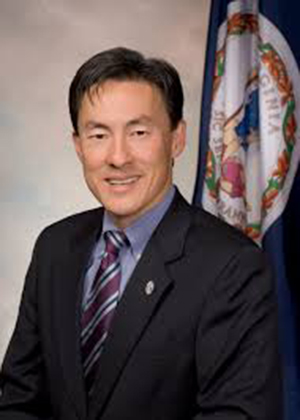 Mark Keam serves as a Virginia State Delegate. He graduated from the University of California, Irvine and received a law degree from the U.C. Hasting College of Law. He began his career in public service as an attorney at the Federal Communications Commission and later served as a policy counsel at the Small Business Administration, where he worked to create a level playing field for women-owned businesses and minority enterprises.

After the Clinton Administration, Rep. Keam moved to Capitol Hill to serve as Chief Counsel to Democratic Senator Dick Durbin on the Senate Judiciary Committee from 2001 to 2007, when he left to become a senior advisor for strategic affairs at Verizon, where he helps the company develop ideas that promote the use of technology to solve societal problems.

The Wheels on the Bus Go Round and Round, Clean and Quiet, All Through the State

Problem  As in most states, Virginia’s public school buses are run on diesel fuels that produce carcinogens like Benzene and particulate matter (PM 2.5) which […]