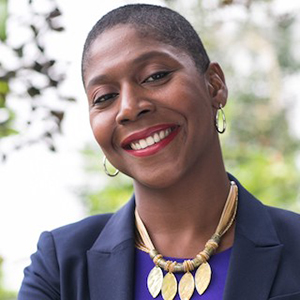 Nirva R. LaFortune is a Providence City Council Member representing the city’s third ward, and is the first Haitian American to hold elective office in the state of Rhode Island. Since joining the council following a special election in August 2017, Councilwoman LaFortune has served as the Vice Chair of the Special Committee on Education. She is the Assistant Director of Scholars Programs and Diversity Initiatives at Brown University, where she oversees programming and advising for the prestigious the Presidential Scholars Program and other initiatives to advance the success of historically underrepresented groups and students with the greatest financial need.

As a former undocumented immigrant, Councilwoman LaFortune is dedicated to equity and increasing educational opportunity. She has worked on initiatives to increase funding and support for students in Providence’s public schools, of which she is a graduate. LaFortune has also championed affordable housing, support for minority and women-owned businesses, community development, prudent financial planning, and increasing community engagement in municipal affairs. She serves on the Board of Directors of the Sophia Academy and We the Village, and on advisory committees for the Eastside YMCA and East Side Community Alliance. Councilwoman LaFortune holds a B.A. in Communications from Temple University and is completing an M.A in Urban Education Policy at Brown University this spring. She is the mother of two incredible young people and is an avid runner.

Problem Underutilized corridors, last-mile connections or access to reliable transportation, affordable housing production, employment opportunity, and a ready workforce is a challenge for many communities. These issues are interdependent yet approached individually. Therefore, lacks a comprehensive solution that can help mitigate the systemic issue. Solution A program that incentivise […]