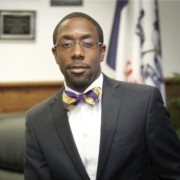 Mayor Quentin Hart is the first African American elected to the office of Mayor for the City of Waterloo, Iowa. Mr. Hart is currently seeking reelection. Preceding the election, Mr. Hart was the Associate Director of Multicultural Affairs for Hawkeye Community College in Waterloo, Iowa, providing leadership for multicultural initiatives and promoting awareness and appreciation for diversity on campus and in the community. In the eight years preceding his mayoral election, Mayor Hart represented the citizens of Waterloo as Ward 4 Councilman and was the first African American-appointed Mayor Pro-Tem for the City of Waterloo.

Hart currently is a doctoral candidate at Iowa State University in Educational Leadership and Policy Studies. He received his MAE in Postsecondary Education: Student Affairs from the University of Northern Iowa and is also a 2013 graduate of the Thomas Lakin Institute for Mentored Leadership. Hart is happily married to Cassandra Hart, a 2007 Gold Star Award Teacher, and is the father of two sons, Quentin Jr. and Quenden; and one daughter, Halayah.