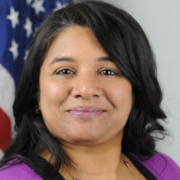 Middlesex County Commissioner Deputy Director Shanti Narra is a proud naturalized citizen. Born in Hyderabad, India, Deputy Director Narra immigrated to the United States when she was two years old. Her parents instilled in her a love of her adopted country and a commitment to service.

She began her career in public service when she began a long professional career as a public defender in Manhattan working with the Legal Aid Society of New York. She still works there full time as a supervising attorney in the Criminal Practice.

In 2004 she moved back to her hometown of North Brunswick, New Jersey. She became a local Democratic Committeewoman and then served on the North Brunswick Township Planning Board, where she was actively involved in the development for the North Brunswick Transit Village, a project she would later vote in favor of when she sat on the Township Council. She believes strongly that this project is an example of smart growth that strengthens the Township’s life, accessibility, and economy.

In 2009 she was elected to Township Council and became the first South Asian woman to serve in such office in the State of New Jersey. After serving on the Council for seven years, in 2016, Shanti was appointed to fill a vacant seat on the Middlesex County Board of County Commissioners. She became the first South Asian (male or female) to serve on a County level in New Jersey’s history.
Currently, Shanti chairs the County’s Public Safety and Health Committee. Since she joined the Board, she has maintained a strong commitment to provide the residents of Middlesex County with programs and resources that will ensure their safety and address their health and wellness needs. County Commissioner Narra was named Deputy Director by the Board of County Commissioners on May 6, 2021.

County Commissioner Deputy Director Narra is serves on the Board of NJ Transit. She is an active member of the North Brunswick Township Community Emergency Response Team (CERT). She is trained in Search and Rescue, Fire Safety, Disaster Medical Operations and received specific instruction from the Red Cross in Shelter Operations. She also serves on the Boards of Jewish Family Services of Central Jersey and the Puerto Rican Action Board. Shanti is a founding member of ISAAW (Inspiring South Asian American Women), a group dedicated to helping South Asian American women become more civically engaged in their communities.