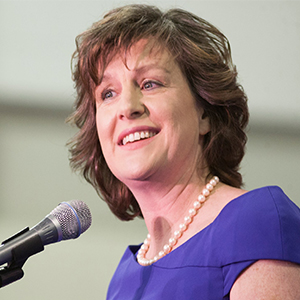 Stephanie A. Miner was the 53rd Mayor of the City of Syracuse. In 1999, Miner earned her J.D. from SUNY Buffalo and began working as a labor lawyer, representing unions and employees. She was elected Mayor in 2009 and became the first woman elected Mayor of any of the “Big 5” cities in New York. She served from 2009 to 2017.

Mayor Miner became a Syracuse Common Councilor-at-Large in 2002 after winning a citywide election. As a Councilor, she championed and helped pass legislation that gave $1 million in initial funding to Say Yes to Education, a program that provides necessary support services for Syracuse City School District students and promises free or reduced tuition to students who graduate from City high schools. During her tenure on the Council, Mayor Miner established a reputation as a principled leader who asks tough questions. This led the Syracuse Post-Standard to endorse Mayor Miner’s 2009 candidacy for Mayor, calling her “principled,” “intelligent,” “energetic,” and a “passionate advocate.”

Problem The City of Syracuse experiences frequent water main breaks, and the Department of Water spends most of their time responding to emergencies rather than […]

Problem In the City of Syracuse, assets like catchbasins, sidewalk curb corners, and stop signs are not mapped in geographic information systems. Knowing where these […]