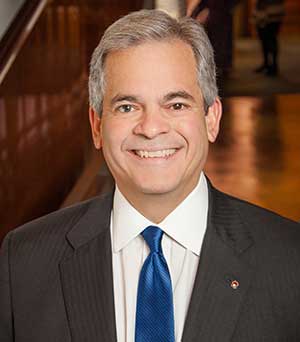 Steve Adler is Austin’s 52nd Mayor, having won re-election in 2018 by 40 points in a field of 8 candidates. His top priorities include mobility, affordability and equity for all Austinites. Adler is a Trustee of the United States Conference of Mayors, Chair of the Capital Area Metropolitan Planning Organization (CAMPO) policy board, and Vice President of the National Council of Democratic Mayors. While he’s been in office the City of Austin passed the largest mobility and affordable housing bonds in its history. The city raised its minimum city wage to $15/hr, passed city-wide sick leave and second chance hiring protections. Still working on the homelessness challenge, the city has become one of a limited number of cities to achieve effective net zero veteran homelessness. The city has become a world leader on climate change action.

Mayor Adler has received broad recognition for innovative leadership. Foreign Policy named him a Global reThinker and Living Cities included Mayor Adler on its list of 25 Disruptive Leaders (along with Facebook’s Mark Zuckerberg and author Ta-Nehihi Coates) to mark that organization’s 25th anniversary. The Austin Chronicle readership has named Mayor Adler as Best City Official each year since 2016. Chronicle critics named Adler Best Drag Mother for his turn as Mother Ginger in Ballet Austin’s The Nutcracker and Most Devoted Pen Pal for his viral Wonder Woman letter. Austin Monthly named Mayor Adler “Best Politician” for “fearlessly speaking up for Austinites [and] proving that a little snark goes a long way to support the morale of a community.”