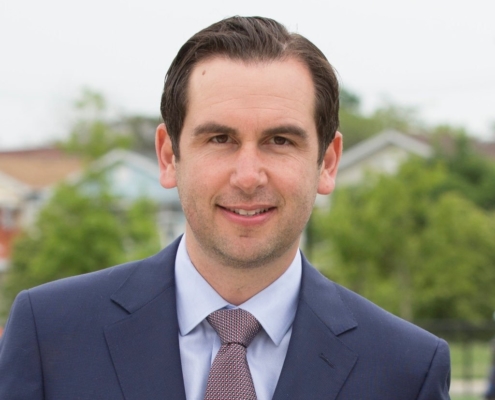 Steven Michael Fulop is the 49th and current Mayor of Jersey City, New Jersey – named the most diverse city in the nation and the soon-to-be largest city in New Jersey.

During his time in office, Mayor Fulop has shown what smart, progressive leadership can accomplish – and opened a new chapter for Jersey City.

Under his leadership, Jersey City became the first city in the state – and the 6th city in the country – to ensure paid sick leave. Mayor Fulop has pioneered new ideas for helping prisoners re-enter society; he’s passed legislation to protect small businesses and encouraged more to open shop; made Jersey City one of the greenest cities in the nation. He’s undertaken sweeping public safety reform, with the JCPD now seen as a model for diversity around the nation. And Mayor Fulop has led the city to record economic development that’s benefited families of all income levels. All without raising taxes.

Mayor Fulop is a first-generation American, a lifelong New Jerseyan, a Marine, and a triathlete. He grew up in a Jewish family in Edison, New Jersey, the son of Romanian immigrants. His mother was the daughter of Holocaust survivors and worked in an immigration services office helping others gain citizenship. His father owned a delicatessen nearby in Newark, where Mayor Fulop worked behind the counter as a teenager.

Mayor Fulop graduated from Binghamton University in 1999 and spent time abroad studying at Oxford University in the UK. After college, he joined Goldman Sachs, the investment banking firm, working in Chicago and later in Manhattan and Jersey City. On the morning of September 11, 2001, Mayor Fulop was working in lower Manhattan when he saw the first plane strike the Twin Towers. A few weeks later, he decided to put his career at Goldman Sachs on hold and join the United States Marine Corps.

Mayor Fulop’s Reserve Unit deployed to Iraq in January 2003. There, he served as part of the 6th Engineer Support Battalion. He traveled into Baghdad during the early weeks of the war. In 2006, Mayor Fulop completed his service to the Marine Corps Reserve with the rank of Corporal.

In 2005, Mayor Fulop was first elected to public office as the councilman representing downtown Jersey City.  He served as a councilman for eight years before becoming Mayor.

Mayor Fulop and his wife, Jaclyn, welcomed their first child, Jaxon, in early 2019.  The Mayor is an avid runner and triathlete. He ran the NYC Marathon in 2012, raising money for the Hudson County Child Abuse Prevention Center. He also competed in the Ironman Championship in NYC that year to raise money for veterans.

Problem The City of Jersey City has ambitious goals for reducing GHG emissions and the use of renewable energy but has a backlog of older, inefficient municipal buildings that need to be upgraded. We also have solar arrays and EV garbage trucks, but no way of tapping into the solar […]

Problem Over the last two decades, Jersey City’s physical, cultural, and economic characteristics have changed significantly. Some neighborhoods have experienced a significant renaissance. Others still struggle to overcome issues that have plagued former industrial centers since the second half of the twentieth century. These issues are social, economic, and infrastructural, […]