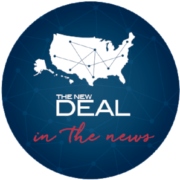 As President Obama made clear in his State of the Union address, we can’t just stand still to win the future. To compete in the global economy, we need to find solutions that are both pro-growth and progressive.

Too often in our nation’s capitol, these two ideals are seen as opposed to each other. We reject this false choice. As former mayors, we saw first-hand how solutions that were both pro-growth and progressive could help to grow the economy in a way that expands opportunity for everyone. As we met our fellow leaders of towns and states around the country, we noticed that many of them were getting similar success from pro-growth progressive solutions.

That’s why we have joined with the NewDEAL, a newly launched national network searching the country for pro-growth progressive state and local elected leaders in order to help them share their innovative ideas to win the future.

We believe that in order to build the vision of progressive growth that the President has laid out, we need to look for fresh ideas not just from the top-down in Washington DC, but also from the bottom up, where local leaders are developing and testing their ideas out on the ground.

Finding the best pro-growth progressive ideas is especially important now, as we make tough choices to jumpstart our economy. But make no mistake: to win the future, we can no longer afford to choose between growing the pie and making sure everyone gets a decent slice.

Growing the economy and expanding opportunity are not trade-offs—they feed on each other. Our economy grows stronger when everyone has the tools to get ahead through hard work, no matter where they come from. But it’s not enough just to support people to take risks like going back to school or starting their own business. In order to make room for more people to get ahead through hard work, we also need to help our businesses grow so that there is more work to be done.

This week, we are excited to announce the first ten NewDEAL leaders from across the country, from red states and blue. These leaders are distinguished by their ideas to spur growth we can all share by harnessing competition and innovation to make government smarter and more efficient.

In upstate New York, a region that has seen the loss of many jobs, Assemblyman Joe Morelle has championed a strategy to win them back: a technology seed fund that gives startup companies the boost they need so that they can grow to the point where they can attract private investment. The seed fund is aimed at spurring smart investments that might not otherwise be made in order to jump-start the economy and create well-paid, sustainable jobs. “New job growth in our state and region will depend on precisely this kind of partnership between the public, private and academic sectors,” says Assemblyman Morelle.

In St. Louis, Assistant Minority Leader Tishaura Jones understands that the key to building long-term prosperity for all of us is to ensure that every American has access to a world-class education, no matter where they come from. That’s why Representative Jones – a mother as well as a legislator – is introducing a plan to help the most effective charter schools expand throughout her entire state, so that every parent can provide the same opportunity for their children as she can.

Such schools are allowed more freedom to develop innovative models in exchange for meeting educational outcomes and test scores. Representative Jones is clear that charter schools must be held accountable for results but notes that they could help spur local job growth by having the flexibility to focus on serving the job needs of different areas, be it on science, agriculture, or drop-out recovery.

And in Nevada, Secretary of State Ross Miller has created the Nevada Business Portal to ensure that government provides tools, rather than obstacles, for job creation. America’s first online “one-stop shop” for companies to do business with the government will make government services more convenient and efficient, freeing up sorely needed resources for other priorities.

In the months ahead, the NewDEAL is committed to helping more of these pro-growth progressive leaders share their innovative ideas. We hope you will join us in nominating leaders on the NewDEAL’s interactive website, www.NewDEALLeaders.org, and help us find the fresh ideas our country will need to win the future.

Maryland Governor Martin O’Malley and U.S. Senator Mark Begich of Alaska are the Honorary Chairs of the NewDEAL.

Today, Governor Martin O’Malley of Maryland and U.S. Senator Mark Begich of Alaska announce the launch of the NewDEAL, a new national network committed to elevating pro-growth progressive state and local elected leaders and their innovative ideas from across the country.

Ten rising elected officials from across the country have been selected as the first group of NewDEAL leaders for their work championing ideas ranging from progressive tax reform to fostering small business growth and streamlining government spending.

“Too often in DC, pro-growth and progressive goals are seen as opposed to each other.  But as former mayors, Governor O’Malley and I saw first hand how solutions that were both pro-growth and progressive could help to grow the economy in a way that expands opportunity for everyone.  The NewDEAL is designed to highlight and foster these types of ideas and leaders,” said Senator Begich, Honorary Co-Chair of the NewDEAL.

“Senator Begich and I have joined the NewDEAL, because we believe that we need to look for fresh ideas not just from the top down in Washington DC, but also from the bottom up, where local leaders are developing and testing their ideas out on the ground,” said Governor O’Malley, Honorary Co-Chair of the NewDEAL.

The first ten leaders to be recognized by the NewDEAL hail from a diverse set of regions and hold a variety of local elected positions.  Those ten are:

The NewDEAL is committed to helping pro-growth progressive leaders share their innovative ideas on its interactive, multi-media website, www.NewDEALLeaders.org. Each quarter, a new group of leaders will be featured.  The public is encouraged to sign up to nominate state and local elected leaders and stay connected as we highlight more of their pro-growth progressive ideas.

The group, called The NewDEAL (an acronym for Developing Exceptional American Leaders), will officially launch Tuesday and is billed as a “national network committed to highlighting and connecting pro-growth progressive state and local elected leaders from across the country.”

The 501 (c)(4) will highlight a group of 10 or 15 elected officials at a time and seek to promote their pragmatic ideas using short videos on an interactive website. The group is encouraging supporters to nominate people and elected leaders in their community through the website.

Begich said the main goal is to highlight the ideas, but that the program can also be used as a recruiting tool for the Democrats in search of appealing candidates in future elections.

“People are excited for this, because nobody is doing it,” Begich said. “It’s a combo of great ideas — a think-tank kind of thing — but at the same time highlighting great aspects of future and current leaders. People are looking for those fresh and new faces.”

The idea sprung from a relationship O’Malley and Begich formed when both were mayors — O’Malley in Baltimore and Begich in Anchorage. Begich said it blossomed when he joined the Senate in 2009 and realized how the chamber was stuck in an antiquated way of doing things.

“That told me that there needs to be a long-range (vision),” Begich said. “At the same time, I didn’t see anybody out there reaching out to some of the new talent and folks that are coming up in the private sector, the local government or the state government.”

O’Malley, who also serves as chairman of the Democratic Governors Association, said the group is coming along at a good time. He said it will occupy some territory formerly inhabited by the centrist Democratic Leadership Council, which folded recently, and also that Democrats need to be reminded that, even though they have most of the power in Washington right now, it won’t always be that way.

“Sometimes control of the White House might distract us from bringing up the next generation,” O’Malley said. 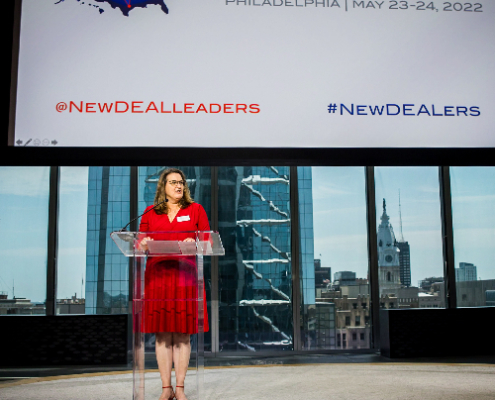