Members of the NewDEAL network featured prominently at Third Way’s Opportunity 2020 event in Columbus, OH last week – a gathering of leaders put on in partnership with NewDEAL and Winston Fisher. More than 25 rising state and local leaders, as well as NewDEAL leadership, participated in discussions about the economic message and agenda required from Democrats to expand opportunity across the country. 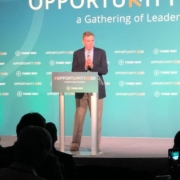 NewDEAL Honorary Co-Chair U.S. Senator Mark Warner emphasized the need for big ideas to adapt to the changing nature of work in the new economy and called for an agenda that addresses the “crisis of opportunity” that results from three states getting the majority of venture capital funds.

“I think that we need to get out of this false choice of red versus blue, or left versus right,” Warner told MSNBC during the event. “I think our politics and the insecurity that Donald Trump has played so well upon is because people are uncertain about the future — globalization, technology, automation. I think the Democrats have got to be willing to lean in to the future.” 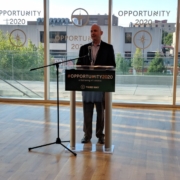 Fellow Co-Chair former Governor Jack Markell said, “It’s important that we have this debate in the party (about an the ideas to take the country forward).” In remarks at the event, Markell credited NewDEAL Leaders for championing ideas that work and that address pressing issues affecting Americans, like State Treasurer Tobias Read’s OregonSaves initiative to increase retirement savings. 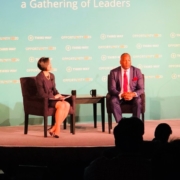 NewDEAL Leader Columbia, SC Mayor Steve Benjamin showcased the results-oriented focus of NewDEAL Leaders as he told attendees that “it’s important to remember that politics is a game of addition, not subtraction; of multiplication, not division.” The mayor stressed the need for the federal government to act to support cities on infrastructure, while also focusing on how local leaders can come together to affect national change on some of the biggest issues.. He talked about mayors showing the impact of climate change solutions by focusing on lower electricity costs, protecting kids from asthma, and creating jobs.

One leader who exemplifies NewDEALers’ ability to succeed throughout the country is NewDEAL Leader Iowa Senator Jeff Danielson. He warned that Democrats must recognize how to address concerns in areas like the one he represents, which “saw one of the biggest swings from Barack Obama to Trump during the 2016 election.” Otherwise, “we will be a permanent minority party in this country.”

Treasurer Read told Time Magazine “there’s a lot of energy and possibility and positivity that resides in (middle-of-the-road ideas) that can easily get overlooked” and that Democrats miss them at their own peril.

NewDEAL will continue to develop and promote the leaders and ideas to make the Democratic Party and the country successful in the new economy. We hope you will join us at our conference in Washington, D.C. from Nov. 28-30, when we will look forward following the midterms and unveil an agenda for state and local governments to address the future of work.