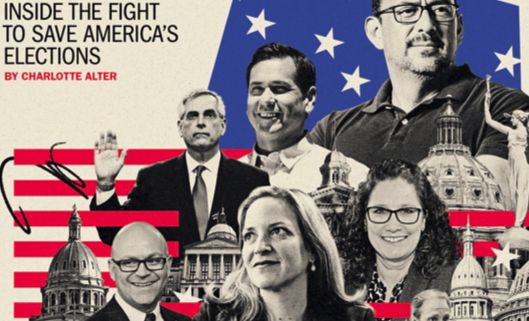 Three NewDEALers were dubbed “Defenders” of American Democracy and featured in the October 2022 TIME Magazine cover storyTIME Magazinecover story as they run in key battleground states against “election-denying candidates” who seek the office of secretary of state, which oversees election administration. Read about Minnesota Secretary of State Steve Simon’s work to push back against “the judgment on the entire [election] system” by promoting election transparency and Michigan Secretary of State Jocelyn Benson, who despite personal attacks, is unwavering in her commitment to preserve the integrity of her state’s election process. A co-chair of the NewDEAL Forum’s Democracy Working Group, Benson is also a national leader on increasing access to voting for all Michigan residents. Also hear from NewDEAL Alum Adrian Fontes, the former Maricopa County Recorder in Arizona, about his high-profile campaign for secretary of state in Arizona, which continues to be a vital state for combating election lies.