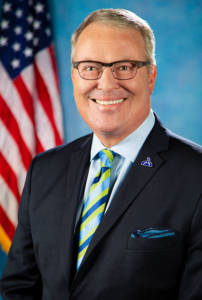 Having served as Mayor since 2003, Buddy Dyer has worked tirelessly to shape Orlando into a future-ready city where unity and partnership are the keys to opening the doors of opportunity for all residents.

Mayor Dyer has increased collaboration between Central Florida’s many governments, its business and civic communities and residents. The result of this cooperation is a string of remarkable accomplishments for Orlando in a very short period of time.

In 2019, Creative Village became a reality, taking a vacant 68-acre site in downtown Orlando and transforming it into an innovation district with UCF Downtown, Valencia College Downtown and the new headquarters for Electronic Arts. Other achievements include SunRail, the region’s first commuter rail line, two new community venues – the Amway Center and the Dr. Phillips Center for the Performing Arts – and the renovation of Camping World Stadium.

Mayor Dyer is leading the efforts for Orlando, and all of Central Florida, to address its challenges, including homelessness, the need for safe, affordable housing and expanded transportation options. He’s also a proponent of diversifying Central Florida’s economy and creating a new breed of high-wage careers for residents in cutting-edge industries such as life sciences and biotechnology.