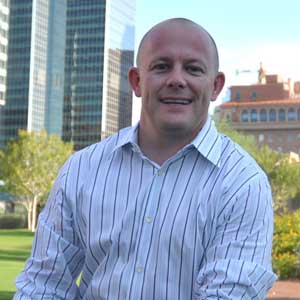 Chad Campbell is a former state representative from Arizona he served from 2007 to 2015 where he represented the 24th district and served as minority leader.

With an eight-year history in the Arizona State Legislature and a lengthy list of civic and economic accomplishments to match, Chad’s proved himself a cross-aisle political powerhouse and a constant advocate for an expansive array of bipartisan issues, including renewable energy, education, sustainable business practices, free speech and accessibility for the disabled. He was also instrumental in improving Arizona’s tax code, increasing the state’s competitiveness while helping level the playing field for Arizona small businesses and families. In addition to his attention to advocacy issues, Chad has repeatedly been recognized for his economic development accomplishments.

Campbell is a Senior Vice President at Strategies 360 Consulting, working in their Phoenix office

Pro-Growth Progressive Idea: Eliminating $10 billion worth of loopholes in the sales tax in order to make pro-growth progressive investments and lower the overall tax rate