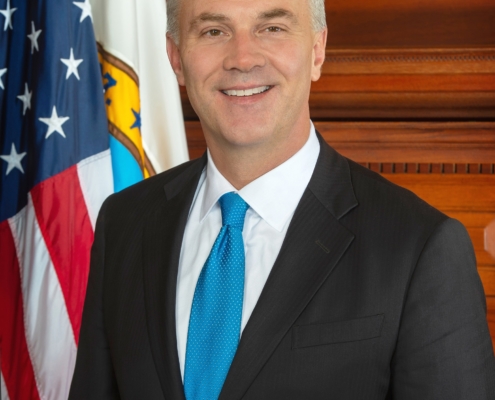 First elected in 2011, Jon Mitchell is New Bedford’s thirty-eighth mayor. He has been re-elected four times, and he is the City’s first mayor to be elected to a four-year term.

Jon has sought to re-establish New Bedford as one of the leading cities in the Northeast. Under his leadership, the historic city has moved aggressively to reform its schools, improve public safety, modernize its port, and to elevate the quality of life in every neighborhood. Under Jon’s leadership, New Bedford has achieved both the highest bond rating and highest high school graduate rate in its history, lowered crime by nearly forty percent, secured hundreds of millions of dollars in new port investments, and positioned itself to become the leader in the emerging offshore wind industry.

Prior to his service as Mayor, Jon served as an Assistant U. S. Attorney in Boston, having previously served as a federal prosecutor in Washington, D.C. in the Attorney General’s Honor Program. Many of his cases were of national importance, including his work as the prosecutor on the task force searching for Boston mob boss James “Whitey” Bulger. He attended Harvard College and George Washington University Law School, and is married to Ann Partridge, a breast cancer doctor and researcher at the Dana Farber Cancer Institute. They have three daughters.