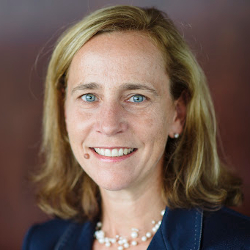 Mayor Joyce Craig was elected on November 7, 2017, as the first woman to be elected to Manchester’s highest office, Mayor Craig has addressed some of Manchester’s most pressing challenges and delivered on the promises she made to voters. A graduate of Manchester public schools, Mayor Craig went on to earn her degree in Business Administration from the University of New Hampshire. Mayor Craig worked as a marketing director in Boston for 15 years where she developed strategic plans and managed multimillion-dollar budgets. She also worked at a biotech startup, helping take the company public.

Mayor Craig is also an avid runner, who has completed 14 marathons, including 10 consecutive Boston Marathons. Mayor Craig and her husband, Michael, have three children, William, Sarah, and Kathryn.