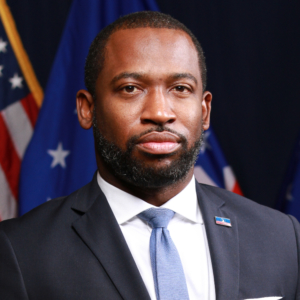 Levar M. Stoney is serving his second term as the 80th mayor of the City of Richmond and is the youngest person to hold the office. He is an Advisory Board member of the U.S. Conference of Mayors, where he chairs the Children, Health and Human Services committee. He also serves as President of the Democratic Mayors Association.

Mayor Stoney served as the Executive Director of the Democratic Party of Virginia in 2008. He went on to serve as the deputy campaign manager for Terry McAuliffe’s successful gubernatorial campaign in 2013 and became the first African-American Secretary of the Commonwealth and youngest member of Governor McAuliffe’s cabinet in 2014. As Secretary, he was the driving force behind the Governor’s efforts to restore the civil and voting rights of more than 150,000 returning citizens. Under Stoney’s leadership, the McAuliffe administration restored more rights to Virginians than the previous seven gubernatorial administrations combined.

During his term, Mayor Stoney has made the largest individual budget investment in public education of any mayor in a generation, putting more funding into the classroom and the maintenance of school facilities. His administration has constructed three new schools in Black and Brown neighborhoods and built a partnership with local out-of-school time providers and the philanthropic community to create access to quality afterschool programming for every RPS child enrolled in elementary and middle school.

Additionally, his administration’s historic investments have resulted in newly paved roads in often neglected neighborhoods, and the dedication of $78 million in American Rescue Plan Act funds toward the rehabilitation and construction of four community centers that will provide access to recreation and city services within walking distance of 100,000 city residents. Under his leadership, the Central Virginia Transportation Authority (CVTA) approved a $113 million regional investment that will enable the completion of the Fall Line Trail and bus rapid transit system, the GRTC Pulse, in order to have mass transit in the city be free for all riders. Moreover, in 2020, he ordered the removal of all confederate iconography in Richmond.