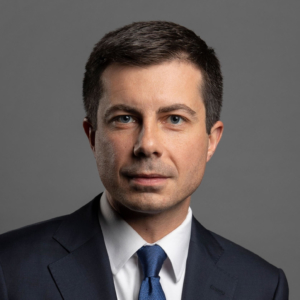 Pete Buttigieg served as mayor of South Bend, Indiana from 2012 to 2020. A Rhodes Scholar, he holds degrees from Oxford and Harvard Universities. Previously he was a management consultant at McKinsey & Company where he worked in energy, retail, economic development, and logistics. He is president of the Indiana Urban Mayors Caucus, serves on the board of the Truman National Security Project and is a lieutenant in the U.S. Navy Reserve. He spent most of 2014 on leave from office while deployed in Afghanistan.

Buttigieg was named national Mayor of the Year in 2013 by GovFresh.com, sharing the honor with New York Mayor Michael Bloomberg, and was called “the most interesting Mayor you’ve never heard of” by the Washington Post. Under Buttigieg, South Bend transformed from what Newsweek called one of “America’s 10 Dying Cities” into a city experiencing its fastest growth in more than a quarter-century.