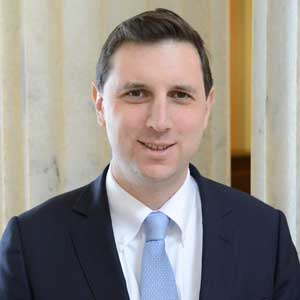 Seth Magaziner was elected to the office of Rhode Island General Treasurer in November of 2014, and is committed to promoting economic growth and expanding opportunity through honest, effective leadership.

As Treasurer, Seth launched the BankLocal program, which has helped hundreds of Rhode Island small businesses get access to the capital they need to grow and expand, by moving millions of dollars of the state’s cash to local community banks and credit unions. He also was a driving force behind Rhode Island’s once in a generation statewide school construction initiative and the establishment of the Rhode Island Infrastructure Bank. Seth made Rhode Island a leader in financial transparency with the launch of his Transparent Treasury initiative, that allows citizens to easily access information about where their public dollars are invested.

Seth was born in Bristol, Rhode Island, and started his career as a public school teacher, and later as an investment professional. He serves on the board of Crossroads RI, Rhode Island’s largest nonprofit provider of services to the homeless. Seth and his wife Julia live in Providence.