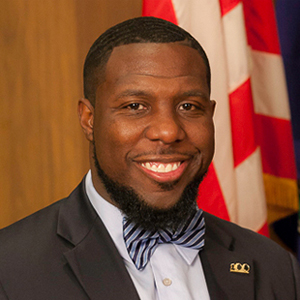 Wes Bellamy was elected as Vice-Mayor of the city of Charlottesville. He was elected to the Charlottesville City Council in 2015. He is a former Board Advisor for the PHAR (Public Housing Association of Residents) Board, has served on the Charlottesville Housing Advisory Committee, and is currently on the Charlottesville Police Citizens Advisory Panel. Wes’s primary focus is on improving the lives of those who lack resources and positive role models in the lives of youth, through programming and education. He strives to do this by sponsoring community days, coat drives, and empowering as many youth as possible through HYPE (Helping Young People Evolve). Started in December 2011, HYPE is a boxing and mentoring program serving boys and girls in the Charlottesville/Albemarle urban ring. In September 2012, “HYPE Steppin” was created as an empowerment program for young women. HYPE, based and predicated on discipline and accountability, has seen positive results. Since the program’s creation, the overall GPA of participants jumped from a 1.8 to 3.2 over the course of approximately 2.5 years. Its success led to a second location in Columbia, SC, which opened in May 2014.

Wes started his career in the Charlottesville area at the National Ground Intelligence Center (NGIC). After leaving NGIC, Wes wanted to focus on being an advocate for people in the community. He was encouraged to pursue a career as a teacher, and eventually hopes to be a principal. He currently teaches computer science and sponsors several clubs and groups at Albemarle High School and is pursuing a doctorate degree at Virginia State University. Wes also serves as the Vice President of the 100 Black Men of Central VA, is an advisor for the Collegiate 100 Black Men of Central VA (UVA Chapter) and is an African American Teaching Fellow. He is also the President of the Young Black Professional Network (YBPN) of Charlottesville and the Charlottesville/Albemarle Alliance of Black School Educators (CAABSE).