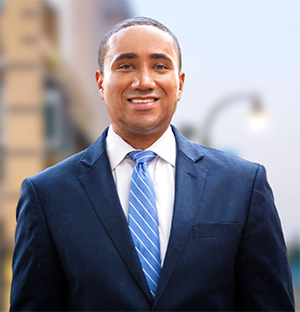 William C. Smith Jr. was born and raised in Silver Spring, Maryland. With the support of his family, Will became a first-generation college student when he attended and graduated from the College of William and Mary. He would go on to earn a master’s degree from Johns Hopkins University and a law degree from William and Mary.

After college, Will enrolled in AmeriCorps where he worked as a community engagement leader for IMPACT Silver Spring and worked at the ACLU as a Legislative Assistant. During law school, Will worked at a law firm handling employment discrimination cases and sought a commission as an officer in the U.S. Navy Reserve, a position in which Will continues to serve in today. In 2010, Will received a White House appointment to serve as a Director at the Department of Homeland Security under President Barack Obama.

In 2014, Will was elected to represent District 20 in the Maryland House of Delegates. As a member of the Judiciary Committee, Will served on the criminal justice and family law subcommittee. Along with these roles, Will was a member of several key workgroups including Justice Reinvestment, Law Enforcement Officers Bill of Rights, and Death with Dignity.