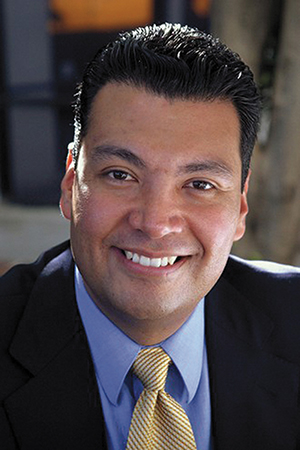 Alex Padilla was sworn in as California Secretary of State on January 5, 2015. He is committed to modernizing the office, increasing voter registration and participation, and strengthening voting rights.

Padilla previously served in the California State Senate (2006-2014) where he chaired the Committee on Energy, Utilities, and Communications. As chair, he shepherded legislation to combat climate change and create a greener and more sustainable economy. He pursued an ambitious agenda in the areas of renewable energy, energy efficiency, smart grid, and broadband deployment.

In 1999, at the age of 26, Padilla was elected to the Los Angeles City Council to represent the same east San Fernando Valley community where he grew up. In 2001, his colleagues elected him to the first of three terms as Council President, becoming the youngest member and the first Latino to serve in this capacity.

Padilla currently serves as President of the National Association of Latino Elected and Appointed Officials (NALEO), a non-partisan organization made up of more than 6,000 federal, state, and local officials dedicated to all aspects of civic engagement.