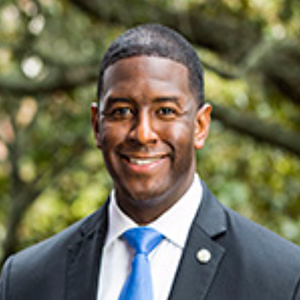 Andrew D. Gillum served as Mayor of Tallahassee from 2014 to 2018. A Florida A&M University graduate, former FAMU student government president and board trustee was elected to the Tallahassee City Commission February 2003. He was elected in August 2014 to serve a four-year term as Mayor for the City of Tallahassee. He has served lead roles for the Financial Viability; Long Range Planning; and, Innovation and Engagement Target Issue Committees as well as the Joint Planning Board for Human Services Partnership. Major community initiatives include Nims Middle School Digital Harmony, Landlord Tenant Mediation, Code Enforcement Amnesty, Palmer Munroe Teen Center, commercial utility deposit rebates, and seven-day guarantee permitting.

He was the National Director of People For the American Way Foundation’s Youth Leadership Programs which includes the Young Elected Officials (YEO) Network. YEO offers elected officials age 35 and under public policy support and leadership development training. Andrew is a Board Director for the Schott Foundation for Public Education and New World Foundation. He, his wife R. Jai, and their twins Jackson and Caroline, reside in Tallahassee, Florida.

Problem New entrepreneurs and start-ups are an important component to growing new sectors of the economy, especially in a City like Tallahassee, where the largest employers and purchasing powers are government related (state, local, universities, etc.). Due to a lack of industry and economic dynamism, the barriers to financial capital […]