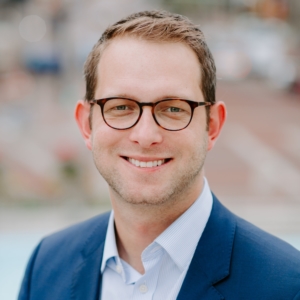 Blake Johnson was selected on June 27, 2020 to fill a vacancy in District 100 of the Indiana House of Representatives. He previously served as a member of the Indianapolis City-County Council.

Johnson serves on three House standing committees: as ranking Democrat on the Local Government Committee, and as a member of the Public Policy Committee and the Roads and Transportation Committee.

During his time on the City-County Council, he spearheaded more than $1 billion in capital investment across his district, and was selected by Mayor Joe Hogsett to help lead an education task force that produced the city’s Indy Achieves Scholarship Program. During his tenure, he served as Chairman of the influential Administration and Finance Committee, which oversees the $1 billion City-County Budget on an annual basis.

As a legislator, Johnson has focused on supporting transit, increasing educational attainment and pursuing talent initiatives.

He and his wife, Natalie, live in the Fletcher Place neighborhood near downtown with their dogs, Jack and Jamison.