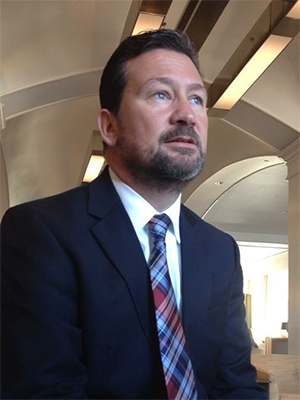 District Attorney Charles E. Branson, was first elected as District Attorney of the 7th Judicial District on November 2, 2004 and took office January 10, 2005. Since then Charles has been re-elected without opposition in 2008, 2012 and is unopposed in 2016.

Charles believes the prosecutor’s office must be more than just a mechanism to incarcerate offenders. He believes the office should support all facets of the community; from developing an active consumer protection division, starting a first of its kind property crimes compensation board to reimagining how victims of crime are addressed by the court system. Charles is an integral part of planning a local behavioral health court that will divert those with mental health problems away from the court system, sparing them criminal records that can jeopardize their support and housing.

Charles is also leading the charge in finding fair justice. He is actively engaged in state and national efforts to determine the best practices for prosecutors’ offices across the country. These efforts are aimed at making sure the rights of individuals are protected while serving the interests of justice. Where defendants are held accountable for their actions and crime victims are afforded the respect and dignity they deserve.

Problem Following the national trend, Douglas County, Kansas has experienced an explosion in its female jail population. Most incarcerated females are being held for misdemeanor […]