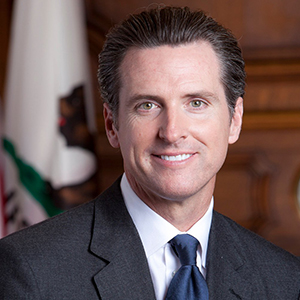 Gavin Newsom was elected as the 49th Lieutenant Governor of California in 2010. Lt. Gov. Newsom is the chief architect of California’s Economic Growth and Competitiveness Agenda, which charts a path for better infrastructure, a focus on manufacturing, building up exports, and other pillars of California’s success.

Prior to his seat as Lieutenant Governor, Newsom served as Mayor of San Francisco where he courageously pioneered a number of progressive reforms, including universal healthcare for all city residents, fighting homelessness by providing shelter and programs for the homeless, and declaring San Francisco as a sanctuary city for undocumented immigrants. He also served as a member of the San Francisco Board of Supervisors from 1997 to 2002.

Additionally, he published a book called “Citizenville: How to Take the Town Square Digital and Reinvent Government,” which explains how ordinary citizens can use new digital tools to dissolve political gridlock and transform American democracy.