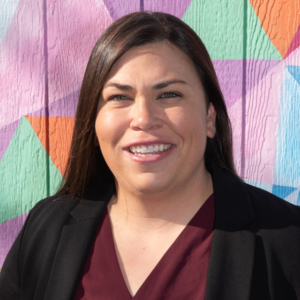 Lacey Beaty was elected Beaverton’s Mayor in 2020, and took office in January, 2021. Prior to serving as Mayor, she served for six years on Beaverton City Council. Before joining the City Council, she was a volunteer for the city’s Visioning Advisory Committee, serving as vice-chair. She is engaged in the community including serving on the boards of HomePlate Youth Services and Community Action. She commits to making our community even more diverse, inclusive, and welcoming.

Mayor Beaty previously worked in public health, managing school-based health centers in five school districts and two counties. She served five years of active duty in the U.S. Army as a radiology specialist and combat medic and served in the 1st Infantry Division during the Iraq War. Mayor Beaty has shared that her military background is the relentless driving force that keeps her moving forward every day. Her daughter Aella is the one who inspires and motivates her to keep doing the work every day to improve
our community.

As Mayor, she brought together public and private partners to establish and facilitate the first COVID-19 mass vaccine POD in Washington County. In addition to the City of Beaverton’s direct allocation of American Rescue Plan Act funding ($16.85M), she brought an additional $5.1M to support projects in Beaverton. Mayor Beaty was instrumental in establishing a year-round shelter with a health clinic and behavioral health resources to serve those experiencing homelessness.

She is the youngest-ever elected official and the first woman Mayor in Beaverton’s history. Mayor Beaty is married, and her husband Ian is a Major with the U.S. Army and a full-time officer in the Oregon Army National Guard. Mayor Beaty has an undergraduate degree in Political Science from Oregon State University and a graduate degree in Management and Organizational Leadership from Warner Pacific University.

With the goal to achieve an equitable recovery in her city, Mayor Lacey Beaty provided targeted small businesses grants.