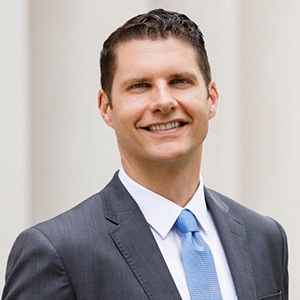 Zach Klein was sworn in as Columbus City Attorney on January 1, 2018 after serving the previous seven years as a member of Columbus City Council, including as Council President from 2016-2017.

Zach is committed to finding bold and creative ways to use the full breadth of the City Attorney’s office to better serve Columbus residents. Zach has focused on how the law can be applied most effectively to promote public safety, encourage economic progress for all, and protect the most vulnerable among us. His office is combatting human trafficking in city hotels and massage parlors, using civil litigation to shut down nuisance properties and illegal businesses, protecting civil rights, promoting social justice reform, and encouraging private sector investment to turn blighted properties into neighborhood assets.

In office, Zach has implemented policies to comprehensively address fundamental inefficiencies and inequalities in the criminal justice system. He has spearheaded efforts intended to prioritize jail space for violent offenders awaiting trial, save taxpayer money, and reduce the amount of time individuals spend in jail while awaiting trial for non-violent misdemeanor offenses. That includes eliminating cash bail, ending the prosecution of low-level marijuana cases and implementing a first-of-its-kind theft diversion program that identifies and treats the root reasons of crime.

Zach is at the forefront leading a statewide, bipartisan effort to reform Ohio’s drug sentencing laws to focus on rehabilitation and treatment instead of incarceration—appropriately distinguishing between those who are fighting addiction and the drug traffickers who prey upon them.

In 2018, Zach spearheaded Columbus’ efforts to enact several new common-sense gun ordinances—including laws to prohibit convicted domestic abusers and other violent felons from possessing firearms. Zach also has pushed to prohibit imitation weapons from being on the streets and to expand Ohio’s nuisance code to include properties where violent felony crimes occur.

Zach grew up in Belpre, Ohio along the Ohio River and is a proud graduate of The Ohio State University and Capital University Law School. He began his career in public service clerking for the Ohio Third District Court of Appeals. He also clerked for the United States District Court for the Southern District of Ohio for both the Honorable Terence P. Kemp and the Honorable John D. Holschuh. He has served in the White House in the Office of Vice President Joe Biden, and as the Deputy Chief of Legal Services in the Ohio Attorney General’s office. Zach also has worked as a Special Assistant United States Attorney and has spent time in private practice.

Project Taillight: Keeping Columbus Safe One Vehicle at a Time

Problem  Too often, low-income individuals don’t have the disposable cash to have their vehicle’s safety lights repaired when headlights, taillights, license plate lights, or brake […]

Problem Many economically disadvantaged neighborhoods are home to entrepreneurs who have the time and energy to help turn their neighborhoods around, but who don’t have […]

Problem Many people commit non-violent crimes as a means of survival. Social determinants barriers, including unemployment and lack of food, may result in substance […]