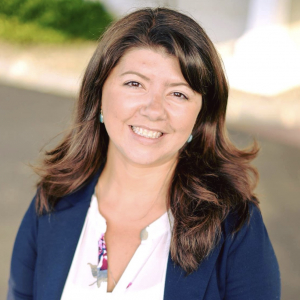 Rebecca Perkins Kwoka currently serves in the NH State Senate, after making history last year as the first openly LGBTQ woman elected to the legislative body. She previously served two terms on Portsmouth City Council and spent over a decade in affordable housing advocacy, resulting in successful, comprehensive zoning changes during her tenue as a City Councilor. As Senator, Kwoka has made supporting working families and small businesses her top priority. She led efforts to pass legislation that expands housing and rental assistance and provides COVID relief for independent live venues and newly-opened small businesses. Kwoka also pushed for bills to invest in offshore wind energy and mandate a sufficient space and break period for nursing mothers in the workplace.

In addition to her legislative work, Kwoka is also Senior Vice President and General Counsel at ReWild Renewables, a small solar company based in her home City of Portsmouth. She lives there with her wife, Katelyn, and their daughter, Logan.