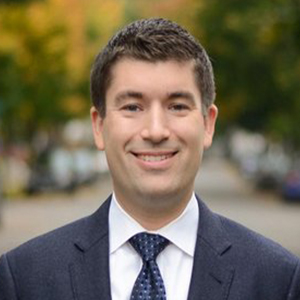 Jules Bailey was elected to the Multnomah County Board of Commissioners in 2014. He served as an Oregon State Representative from 2008 – 2014. In his first term as a Representative, Jules was co-chief sponsor of HB 2626, the Energy Efficiency and Sustainable Technology (EEAST) Act, which passed with overwhelming bi-partisan support and was signed into law by the Governor. Jules also co-sponsored legislation to train workers in clean energy jobs, encourage renewable industries in Oregon, and build a sustainable economy in Oregon. Jules was named Oregon League of Conservation Voters Innovator of the Year, as well as one of 35 Innovators under 35 by 1000 Friends of Oregon.

In addition to his public service, Jules runs Pareto Global, LLC, an economic consulting practice. Prior to founding Pareto Global, Jules was an economist and sustainable development specialist at ECONorthwest. He works at the intersection of economics, public policy, the environment, and urban development and brings a specialization in clean energy financing. Jules was also elected a member of the Pivotal Leaders business network.

Problem Unaddressed mental health issues drive costs in both our criminal justice and homelessness systems, and contribute to rising healthcare costs. Only 5-9% of emergency […]

Problem With scientists’ predictions of a massive earthquake affecting a sizable portion of the Pacific Northwest in the next 50 years, too few commercial buildings […]