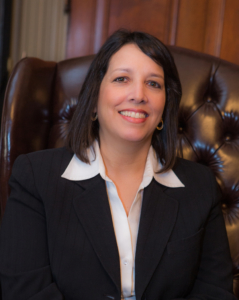 Kim Driscoll took office as Salem’s 50th Mayor – the first woman to be elected to the position – in 2006. Previous to being Salem’s Mayor, Kim was an elected member of the Salem City Council and served as the Deputy City Manager and Chief Legal Counsel for the City of Chelsea, Massachusetts. Prior to that she was the Community Development Director for the City of Beverly, Massachusetts.

Over her four terms in office Mayor Driscoll has transformed Salem, professionalizing municipal services, closing multi-million dollar budget shortfalls, opening up City government, investing in parks, roads, and public spaces, strengthening the public schools, and more. From one of the first non-discrimination ordinances in Massachusetts and a 100% score on the Municipal Equality Index, to major investments in veterans’ benefits, to the first age-friendly action plan certified in Massachusetts and a new senior center, Salem under Mayor Driscoll has been – first and foremost – about including and welcoming everyone. Kim’s leadership has helped transform the hip and historic Salem into what Boston Magazine called in 2013 one of Massachusetts “Best Places to Live.” In 2017 Kim was elected to her fourth term as Salem’s Mayor and she remains just as optimistic and hopeful about Salem’s future, and just as committed to leading a great city forward.

Problem One of the biggest obstacles in preparing students–especially lower income kids–to contribute as thoughtful young leaders within our community is our antiquated school calendar. […]

Problem Salem’s downtown pedestrian mall was in need of a variety of improvements; it was tired, in need of maintenance and repair, was not pedestrian […]

Problem For many of our students, attending college, let alone obtaining a degree, feels daunting and out of reach, especially for first generation college goers […]