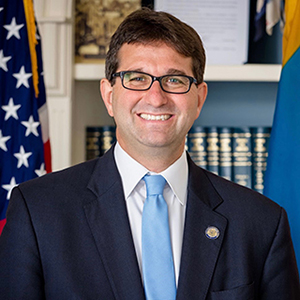 Matthew Meyer has lived an extraordinary life of service, educating high needs Washington, DC and Wilmington children and creating jobs in some of the most challenging neighborhoods in East Africa. Mr. Meyer has won awards for his Mathematics instruction, worked as an attorney at a leading global law firm, started two companies and served in Iraq as a diplomat. As a diplomat during Operation Iraqi Freedom and Operation New Dawn, Mr. Meyer worked with Americans and Iraqis to build a lasting peace in Mosul, embedded with the US military for one year.

After a stunning upset over a three-term incumbent in his first run for public office in 2016, Mr. Meyer immediately brought fresh ideas as the chief executive of Delaware’s largest local government. Within eight weeks, Mr. Meyer had attacked fraud, waste and abuse and reduced county spending by nearly 3%. In his first year in office, Mr. Meyer appointed the first African-American police chief in the 104 year history of the state’s second largest police department, held the first-ever county Iftar dinner, attracted Del Monte Fresh Produce to announce plans to build their largest US distribution facility, and saved county taxpayers over $2 million through modifications to the farmland preservation program. Mr. Meyer recently announced innovative literacy and engineering programming in the state’s largest library system, focused on providing equal opportunity, as well as an online technology platform that enables citizens to view county tax spending online just as you can view your bank statements.

Problem Across the country and in New Castle County, there is a mismatch between available jobs and people skilled to perform them. One key gap is in the technology area, where the jobs of tomorrow across many industries will increasingly rely on software development skills, and where there exists a […]

Problem Young adults and teenagers can be disconnected from their communities, schools, and the workforce, which can lead to involvement in violence and crime.  Solution For years the county has had a summer jobs program for high school students. Months into his first term, Matthew Meyer created a Second Chance […]